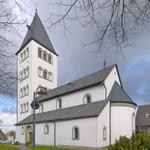 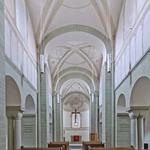 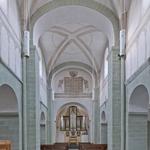 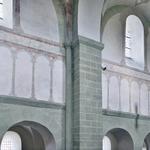 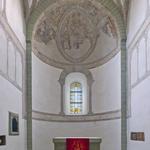 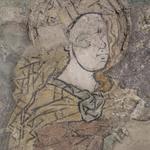 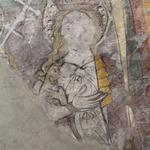 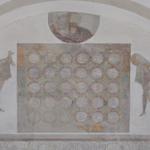 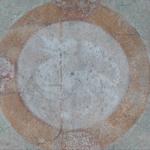 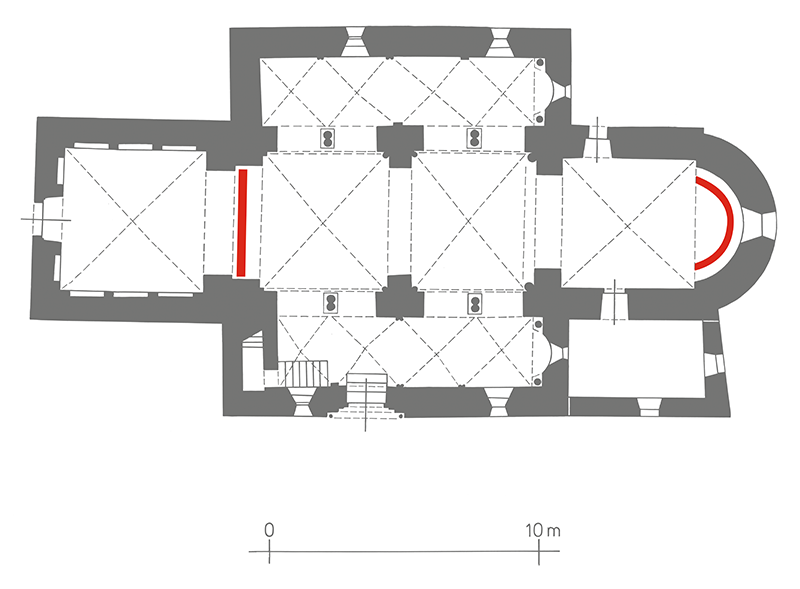 Building structure
Basilica of two bays with quadratic choir and recessed, almost semi-circular apse. The mighty west tower taken over in the lower storeys from the previous building. The east walls of the side aisles each have an altar niche, the arches of which are supported by inset pillars with richly ornamented cushion capitals. Particularly qualitatively formed building ornamentation.

Romanesque polychrome architectural decorations
Besides the architectural and sculptural qualities of the church, the Romanesque interior painting from the time of construction with the unusual painted triforium on the clerestory of the central nave and choir bay, the painted arcatures at the sides of the windows and the vault ornamentation of botanical (including tree-of-life) motifs and geometric decoration and groin-accompanying bands stand out as particular evidence of artistic creativity. The architecture is supplemented and further subdivided by these merely painted structural elements and ornaments that were exposed and conserved in 1960/61, whereby the colour design finally complements the building conception. The figurative depiction of the sacrifice of Cain and Abel on the west wall forms part of the polychrome architectural decorations.

Figurative Romanesque wall painting
West wall of the central nave: Sacrifice of Cain and Abel.
Calotte of the main choir apse: Christ in Majesty with Saints

Crafting technique/painting technique
West wall: Thinner, presumably single-layered plaster of differing grades of smoothness. The painting was carried out on the still damp plaster so that at least the preparatory drawings and the inner colouring could be bound al fresco. Evidence of this is also provided by the impression of a snapped line that was used as a construction aid and has left a mark in the damp plaster. When applying further modelling, such as white highlights, the plaster had already dried. Pigments discovered: green earth, iron-oxide red, ochre, ultramarine.
Apse calotte: Lime secco painting on a lime-wash, approximately 1 mm in thickness, on already aged plasterwork. The halos, but also attributes such as a book, garment clasps and borders were emphasised by indents in the old plasterwork (cut-out plaster modulations). Smallest remnants of gold lead to assumptions of former gilding. The preparatory drawing of the figures was carried out in iron-oxide red, then the inner colours were applied, on which the black contours were drawn quickly and concisely. Most of the coloured modelling is missing today, but appears on the faces to have never existed. The background of the painting was blue (azurite on vine black). Further pigments: malachite, red lead, ochre, iron-oxide red.

Conservation history
Paintings on the west wall and polychrome architectural decorations exposed in 1960 and conserved, renewed restoration 1989.
Apse calotte already exposed in 1928, 1944 overpainted again, 1961 re-exposed and conserved.
Renewed conservation and restoration of the interior and its wall paintings in 2016.
The preserved parts of wall paintings show a strong reduction of the paint layers. Nevertheless, the development of the paintings from the conception on the wall to some highlighting and modelling as final painting procedures can be recognized. In the apse calotte, particularly in the lower section, considerable parts of the illustration are missing.

Description and iconography
In the centre of the west wall of the central nave a large painted wall hanging is draped around which the pictorial scene is grouped. Closely above the wall hanging, God the Father appears in front of an ultramarine background with his right hand raised in a gesture of blessing. At the sides of the wall covering Cain and Abel are standing in a mirrored positioning. Both are humbly turning towards God the Father with bended knees and at the same time in a striding gesture and with shrouded hands and heads tilted backwards are holding up their sacrifices – Abel the lamb and Cain the sheaf of corn. They are wearing short tunics with belts, the whitish, thin fabric of which is visible from their shoulders downwards. There the green upper garments are gathered together with brooches, lead down their backs and fall – at the same time shrouding their hands – in front of the body as a panel of fabric. The moment described is that of the biblical story in which God the Father blesses Abel, but not Cain. Thus Abel is standing at the right hand of God, to where the hand of blessing is pointing.
The sacrifice scene is regarded as being the symbol of the Christian Sacrifice of the Mass. For this reason it would have been appropriate from an iconographic point of view to design the wall hanging as an antependium, i.e. as an ornamental cover hanging in front of the altar, which in this function would have made it lower in relation to the figures. The fact that this was not done, speaks in favour of an addition of the sacrificial scene that was not planned at first, but carried out after all at the same time for painting technique purposes and during which the large-format wall hanging now stands slightly disconnected next the dainty surrounding actors. This scene is often found near to the altar (e.g. in the Parish Church von Bochum-Stiepel) as a typological prefiguration of the Sacrifice of the Mass. In Ostönnen there is no space on the double arch of the choir which explains the switchover to the west wall.
In the apse calotte Christ is enthroned in the mandorla with sceptre and right hand raised in a blessing gesture. This depiction of Christ in Majesty is surrounded by symbols of the Four Evangelists of which only the top ones, the angel for Matthew and the eagle for John, have been preserved. At the sides of the mandorla, to the right hand of Christ, the Mother of God, Mary and on the left hand John the Baptist, are placed, who are turning to Christ pleading as intercessors for the people. The Christ in Majesty is therefore extended to become a Deesis. Next to Mary a Holy Bishop can be seen, probably St. Nicholas, next to John is a female Saint, presumably St. Catherine. In the lower section of the calotte are large lacunae, for example only a small remnant of the figure of John still exists.
On the wall surfaces of the apse to the side of the window there have been no findings of any figurative paintings. It appears that in the apse, like today, the polychrome architectural decorations from the time of construction could be seen together with the 80 to 90 years younger figurative painting of the apse calotte. In turn there are no findings at all of any older polychromy of the calotte.

Art-historical classification
West wall: The delicate and lively figures of Cain and Abel with their close-fitting, softly flowing garments clearly belong to the painting tradition of the 12th century, as they have been handed down in the significant Rhine-region wall painting cycles of the capital hall in Brauweiler and the Double Church in Schwarzrheindorf dating from 3rd quarter of 12th century. Their skilled workmanship reveals a trained hand. In its composition and style the sacrificial scene in Ostönnen can be easily compared with the sacrificial scene on the east wall of the crossing in the village church of Bochum-Stiepel.
Also the painted wall hanging on the northern diaphragm arch wall in Stiepel, at the side of the figure of Abel, is so similar in its composition that the one must consider that this was the work of one artists‘ workshop or at least of one figurist, who possibly also painted the wall hangings, in both churches.
Apse calotte: The fragmental late-Romanesque depictions in the calotte show less distinct similarities with the preserved monumental wall paintings than with the panel painting in Soest, such as the “Gnadenstuhl” (Throne of Mercy) altarpiece (Berlin, Staatliche Museen, Gemäldegalerie) and the Madonna Panel (Florence, Bargello). The strong, physically captured figures with the rich garment drapings can, however, also be found in St. Nicholas’ Chapel in Soest, but there with different types of heads and more antiquated architectures. The comparison with works of Soest origin produced around the middle of the century and shortly afterwards, renders a dating of the Zackenstil (Jagged Style) wall paintings in the apse calotte during the same period extremely probable.