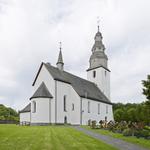 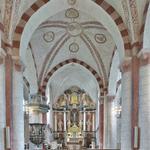 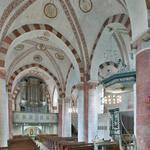 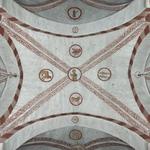 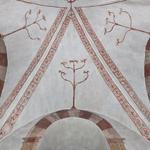 Schmallenberg-Wormbach, Catholic Church St. Peter and Paul, vault painting in the western vault of the southern side aisle, Photo: LWL/Dülberg. 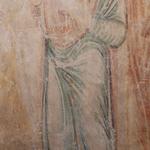 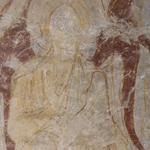 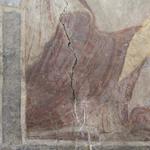 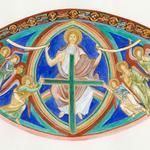 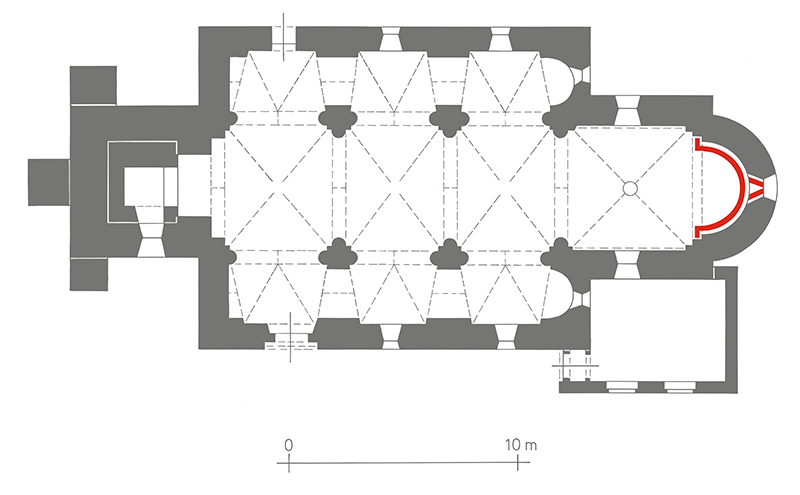 Schmallenberg-Wormbach, Catholic Church St. Peter and Paul, ground plan (The mappings (German version) can be opened by clicking on the red markings).

Building structure
Hall church of three bays. The quadratic choir with recessed apse probably also from an older previous building like the west tower (without the younger buttresses and the inner reinforcements of the walls). Aisles with inner apsidal closed walls, outside with straight-closed east walls.

Romanesque polychrome architectural decorations
The almost completely preserved polychrome architectural decorations from the time of construction of the hall nave contributes towards the special significance of the Wormbach Church. The pointed arches of the groin vaults are strongly emphasised by the painted ashlar masonry made up of dark and light red areas on the face sides. In the vaults along the groins are scrolling vine friezes and also in the central nave depictions of the signs of the zodiac that are unique in their type of application in the vault. Tree-of-life motifs decorate the side aisle vaults. Scrolling vine friezes also run below the windows that are framed by fictive pillars. In particular due to the only painted foliated capitals of the central nave pillars, one can see that when creating the simple architecture forms from brittle stone (Grauwacke), the paintings were already planned and the whole concept of the interior was completed only when these had been carried out.

Crafting technique/painting technique
Fresco painting on thin, single-layered plaster that was applied from top to bottom and well smoothened. Clearly recognisable are the horizontal plaster seams that are identical with the scaffold positions (putlog holes recognisable). In particular the paint layers that were applied al fresco to the fresh plaster are well preserved, also the preparatory drawings in yellow ochre and some internal colours and underpaintings that were carried out with earth pigments. Of the secco paint layers that were modelled after extensive drying of the plaster only a few sparse remnants have been preserved. The following pigments were used: iron-oxide red, yellow and red ochre, green earth, copper green (malachite), red lead, vermilion, natural ultramarine (lapis lazuli), vine black, white lead. The smallest fragments prove that the halos were gilded as well as the inner and outer accompanying strips of the mandorla frame, the upper coloured strip of the rainbow and the frame of the formerly green cross.

Conservation history
Exposure and conservation of the polychrome architectural decorations 1955-57. The reintegrations of the extensively preserved original areas were carried out as cross-hatchings and are well legible. In 1989 new conservation while maintaining the old re-integrations.
The figurative wall painting in the apse in 1911 was partly exposed but not conserved. In 1963 completely exposed and conserved. Only the plaster infills were tinted, but no re-integrations in the existing paintings. Further conservation in 1989.
The fact that today the upper paint layers are mostly missing should not distract from the original colour intensity of the painting (see Water Colour Reconstruction). The blue backgrounds and many green accentuations with the multi-coloured figures whose garments show a rich colour spectrum, provided a very brightly-coloured picture. The colouring of the figures, however, let the plaster ground play a role and did not completely cover it, but was applied lightly with coloured accents in the depths of the folds. These lighter figures, therefore, must have stood out against the strong blue and bright green framework.

Description and iconography
In the apse calotte the eschatological Christ is enthroned on a rainbow in the middle of a multi-coloured mandorla. Two angels approaching from the sides are holding a large Latin crucifix centrally before the figure of the enthroned. At the outer edges of the picture, trumpeting angels are heralding to the church interior the resurrection of the Son of God and by doing so are awakening the dead. Between them and the supporting angels there are two other angelic figures, on the left an angel playing the harp and facing Christ, and on the right a blessing angel that is looking straight ahead from the calotte at the observer. Christ is raising his hands above the cross and is holding two tituli in them.
Below this is a row of seated Apostles, six figures each on the left and right of the east window, together holding one titulus and gesticulating. To the left of the window the northern row is being complemented by the seated Mary, on each outer side are trumpeting angels, in accordance with the Gospel of Matthew: “..and they shall gather together his elect from the four winds ..” (Matthew 24, 31).
Below this, two other registers follow: One narrower one on which the blessed and the damned are pictured raising from their graves, and below it a broader one on which in the northern part the blessed are led into the divine Jerusalem, and in the southern part the damned are driven into the open Mouth of Hell and received by devils.
A saint is standing on each of the reveals of the east windows, the right-hand one can be identified by the titulus as Patroclus, the left-hand one as Cyriakus by the titulus remnant and his deacon’s robe. Above this in the rounding of the arch are three medallions with half-figures. In the apex an extensively disintegrated angel with halo and below it two female figures are standing who can be identified as the wise and foolish virgins, a parallel to the Last Judgment. A wide foliate frieze with bust portraits of angels in medallions serves as the lower border of the figurative cycle. The pedestal area below it shows no remnants of any original painting.

Art-historical classification
The figure style of the Last Judgment in Wormbach is distinguished by the fact that the figures are all slender and tend to have small heads. In particular the angels show various movement motifs, from a strong turn of the body to a still, frontal stature. Their robes tend to be thin and the acting figure with its limbs can be recognised beneath it. Even the voluminous coat of the Judge of the World falls in fine parallel folds and wide swings and ends below the left arm in a bundle of fabric. This bundle is a characteristic element of the pictures.
There are robe motifs that reveal the Byzantine influence and can also be found during 12th century in the German art region e.g. in Bochum-Stiepel (in the figure of God the Father on the triumphal arch). In addition, the plastic overlays or incisions on the halos and ornamental elements are missing in Wormbach that lend even more effect to the Westphalian paintings of the 13th century on the gilded sections.
Despite the strongly reduced paint layer, an experienced workshop can be recognised, the style of which and the pictorial elements used show parallels to a series of paintings and plastic works of the 12th century. A dating of the depiction of the Judgement to the end of the 12th century, around 1180/90 and therefore much earlier than presumed so far, therefore appears almost compulsory.