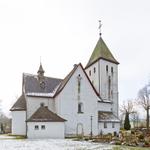 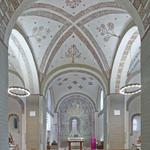 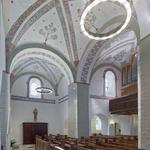 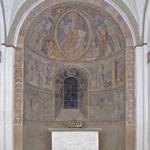 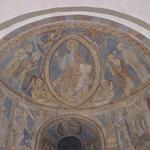 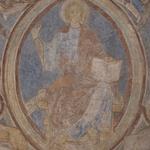 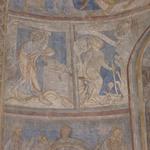 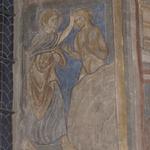 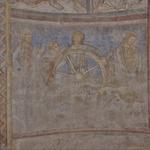 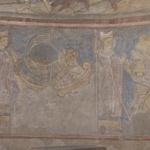 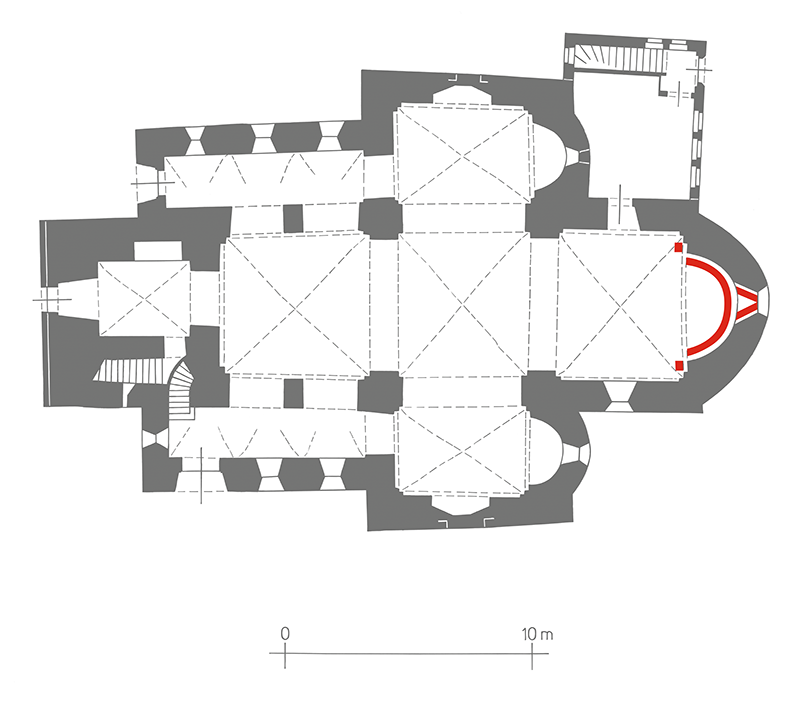 Schmallenberg-Berghausen, Catholic Church St. Cyriakus, ground plan (The mappings (German version) can be opened by clicking on the red markings).

Building data
The dating so far ranges from the 2nd half of the 12th century to 1220. The stylistic features of the figurative wall paintings in the main apse indicate the completion of the church at the latest around 1210. Tower west wall reinforced during the 19th century from outside. Vestry dates from 1932.

Romanesque polychrome architectural decorations
Polychrome architectural sections, painted architecture framings of the windows, tree-of-life motifs, cross medallions and groin bands filled with scrolling vines in the vaults are well preserved and carefully restored. To complete the plainly designed architectural features in the interior, it is certain that the coloured architectures and decorations on the wall and vault surfaces were planned from the very beginning in the so-called Westphalian type of painting. As the architecture has been unchanged to a great extent, in Berghausen one can experience a qualitatively painted late-Romanesque church interior of extraordinary completeness, including the figurative wall paintings in the main apse.

Crafting technique/painting technique
The pictorial scenes are executed in lime-secco technique on double-layered, already completely dried plaster to which a thin lime wash has been applied as a ground. Construction lines and preparatory drawings were carried out in yellow ochre on the still damp lime wash and were partly extended and elaborated with red ochre. As a binding medium for the paint layers applied on top, proteins and slight traces of oil have been found. The painters only used precious ultramarine for the blue shades. In addition, traces of the following pigments have been found: red ochre, vermilion, red lead, red and yellow iron oxide pigment, blue black/vine black, ivory black, malachite, green earth, yellow ochre, calcium carbonate and white lead. Traces of gilding can be determined on the halos and the mandorla.

Conservation history
In 1936 carefully exposed by removing younger washes and conserved restrainedly. Partial tracing of the contours, in particular in the faces, but mostly without deviations from the original. Further conservation measures in 1948, 1961, 1982 and 2014, in each case respecting the original paintings discovered. Reintegrations and infills (1961: Tratteggio reintegrations) remained restricted to the lacunae in the plaster or in the paint layer. The whole late-Romanesque figure programme is in fact reduced in the paint layer, but with the exception of the pedestal area and smaller imperfections, has been preserved almost unaltered and complete so that one can speak of an unusually good state of preservation of the wall painting cycle.

Description and iconography
In the apse calotte the central representation of Christ in Majesty, the Enthroned Christ, is located, surrounded by the four Evangelist symbols and figures of Saints. To the right hand of Christ, Mary and John the Evangelist are standing. At his left one can see Peter and the Church patron Cyriakus.
On the walls of the apse below this are four scenes from the Old Testament: The Sacrifice of Isaac, Moses before the Burning Bush, the Commendation of the Tribe Levi by Moses and Samson with the Gates of Gaza.
In the window reveals these are contrasted by biblical scenes from the New Testament in accordance with mediaeval typology: The Annunciation of Mary, The Lamb of God, the Baptism of Christ.
On the lower northern wall surface one can see the depiction of a Wheel of Fortune based on the tradition of late antiquity. The Goddess of Good Fortune, Fortuna, is seen turning the Wheel of Fortune, between two flanking kings. In the space to the south of the window there are two scenes from the legend of St. Nicholas. The representation shows the rescue of sailors in distress by St. Nicholas who, in the second scene, is being thanked by those he has saved. The confrontation of the scenes indicates a moral appeal to believers not to trust blind fortune, but the intercession of the saints.
In the base area the depiction of a fable creature, a griffon, has been preserved.

Art-historical classification
Flowing, shape drawing style with distinct differentiation of colours and artistic elaboration, the content being ambitiously arranged and of high quality. Here there were at least two artists working next to each other. The Berghausen painting cycle does not yet reveal the least sign of Zackenstil (Jagged Style) and shows many influences and pictorial motifs originating from 12th century. In addition, the compact and factually complex programme is closely linked with the strong theological features of the painting system of the third quarter of the 12th century in the Rhineland. However, as a result of the physical presence and monumentality of the figures, a classification to the early 13th century is justified, although one should not diverge too far from the turn of the century as the analysis of the preserved inscriptions has also proven that the almost purely capital letter shapes and the very static style of the form of the scripts are characterised by patterns from 12th century.