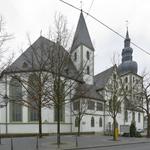 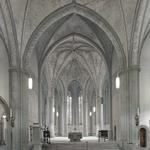 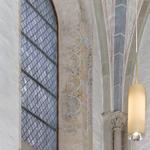 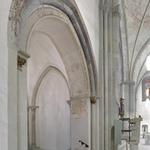 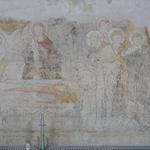 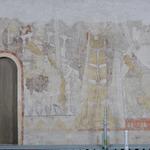 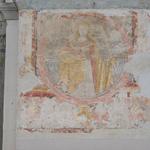 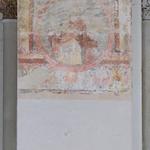 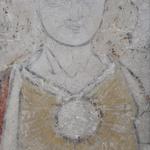 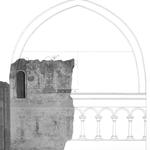 Lippstadt, Protestant Church of St. Mary, reconstruction of the original northern wall of choir with photomontage of the existing wall paintings. Photo: LWL/DLBW. 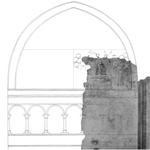 Lippstadt, Protestant Church of St. Mary, reconstruction of the original southern wall of choir with photomontage of the existing wall paintings. Photo: LWL/DLBW. 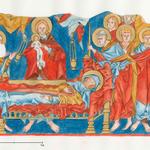 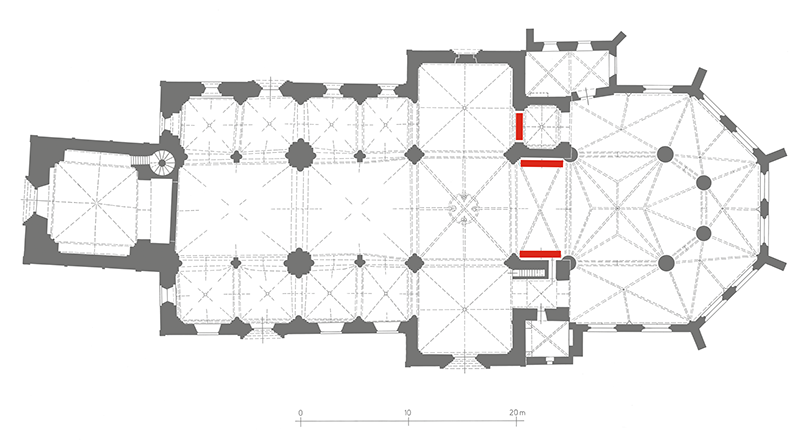 Lippstadt, Protestant Church of St. Mary, ground plan (The mappings (German version) can be opened by clicking on the red markings).

Crafting technique/painting technique
Fresco painting on a thick, single-layered, carefully smoothened plaster. In many places that need particular emphasis, for instance on the halos, furniture, clothing, attributes, traces of keying , used to increase adhesion, indicate formerly existent plastic applications. According to the remains existing in some places, these were applications modelled from stucco-type plaster with gypsum content. There was no evidence of the gilding of these applications that however most likely existed.
The preparatory drawing applied on the still damp plaster is carried out in black in both the pictorial scenes in the choir and in the depiction of the female martyrs in the north tower chapel, in contrast in the case of the figures of apostles and saints in the choir walls, these are painted in red. The highlights were again shown as meandering shapes here, the so-called chrysographies. For the bright red parts of the robes, today turned brown, vermillion was used on an underpaint of white and red lead, for blue areas of the clothing azurite. Both pigments were applied in secco technique. Contours were drawn in black or red. The use of azurite can be presumed for the probably blue backgrounds of the paintings. Tiny remains of gold can be found in the case of the female martyrs on the inner, framing edge strip of the medallions and on the halos.

Conservation history
In 1863 exposure of the Death of the Virgin and Disputation of St. Catherine that have been preserved almost without restoration work. In 1972-75 exposure of the Apostles and Saints in arcades below the two pictorial scenes on the choir walls and conservation of all Romanesque wall paintings including the remains of the polychrome architectural decorations. In 2013 minor conservation measures in the course of the examinations for the research project.
The late-Gothic annexed choir and the consequent reduction of the formerly quadratic Romanesque choir bays to today’s oblong, newly vaulted form caused the loss of the upper and eastern parts of the wall paintings located there with further presumable illustrations, and also led to fragmentation of what is visible today.
The two medallions in the west arch of the north tower chapel below the demolished imposts are the best preserved remains of a series of eight female martyrs who on the arch above it are still partly visible in a worse state of conservation, but otherwise have been painted over.
Well preserved are in particular the paint layers integrated al fresco and the inner colours of the figures, on the other hand parts applied in secco technique after drying out the plaster in the form of modellings, shading and highlighting have been lost except for some informative remains.

Description and iconography
With the Romanesque fragments on the walls preceding the choir, significant parts of scenic representations have been preserved that are rare in the Westphalian region.
The depiction of the Death of the Virgin presents the situation of the Dormition of Mother Mary and the assumption of her soul that has just left her body by her son, Jesus Christ, in the presence of the Apostles. The picture is dedicated to the episode in the life of Mary that has only been handed down in the form of legends and not described in the Bible and which was replaced in occidental art by the Ascension of Mary. In the way Christ is carrying the soul of his mother, one can see a particularly close relationship between Him and his Virgin Mother that includes the idea of the “unio mystica“ of bride and bridegroom in the Coronation of Mary in Heaven.
The Disputation of St. Catherine of Alexandria on the opposite wall depicts a scene from the life of the Saint. St. Catherine who is standing in the middle of the picture facing the observer, is engaged in discussion with the philosophers at the court of the Emperor Maxentius, who is enthroned on the right of the picture. As a further illustration of a mental state, the scene elucidates perseverance in the faith. The upright Catherine is shown at a moment in which she succeeds in convincing the crowd of wise men of the Christian faith.
Of the 16 figures standing in the arcade arches below the two pictorial scenes, only twelve can be interpreted as apostles because of the canonic number. The other Saints remain unnamed.
In the case of the female martyrs of the North Tower Chapel, these are frontally facing, half-length figures of Holy Virgins who also cannot be identified more closely due to the lack of unmistakable attributes.

Art-historical classification
It can be stated that the two scenic representations on the ante-choir walls and the representations of the female martyrs in medallions belong together. They are uniform both in the perception of figures, the formation of their garments and in the painting technique. The examination of the ornamentation in the south transept, the northern transept at the passage to the former North Chapel and the walls of the ante-choir also provide evidence of a relatedness of the fragments both qualitatively and stylistically.
On the other hand, the poorly preserved Apostle friezes below the scenic representations are much worse in the quality of their detail, such as the large heads with the narrowly set eyes on the north side and the clumsy-looking feet on the south side. This leads the observer to presume the work of another painter. The realisation of the scenic representations was, however, the result of the work of a well-versed artist, whereas the Apostle Frieze was created by a less experienced or an untalented hand. The painting technique with the painting carried out on fresh plaster, however, indicates a simultaneous creation of pictorial fields and Apostle friezes.
The greatest conformity of the figurative paintings in the further developed Zackenstil (Jagged Style) exists in the wall paintings in Ostönnen and the panel paintings of the Soester Throne of Mercy in Berlin (Staatliche Museen, Gemäldegalerie), that are both dated within the period around 1260. In the ornamentation there are very close matches in Lippstadt and Ostönnen that lead one to assume the same workshop. The specific details in the depiction of the hands in Lippstadt and in the panel originating from Soest indicate a very close relationship between the painters. For the wall paintings in Lippstadt the time of origin is most probably after the middle of the century, around 1260, on the other hand a close connection with Soest can be recognised.
In the combination of consciously applied formal media that vary depending on the figure and its position in the picture, and the depiction of the inner mood of the protagonists, the masterwork of the Lippstadt artists becomes apparent. Because of the unusual contents of the pictures, the variation of the applied formal media and the artistic quality of their execution, these wall paintings in the impressive Romanesque structure can be classified as very high-ranking.