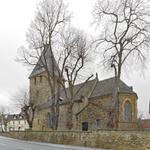 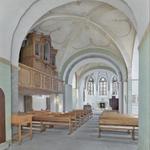 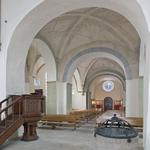 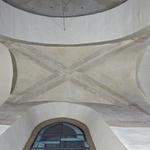 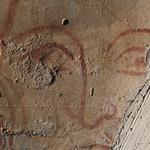 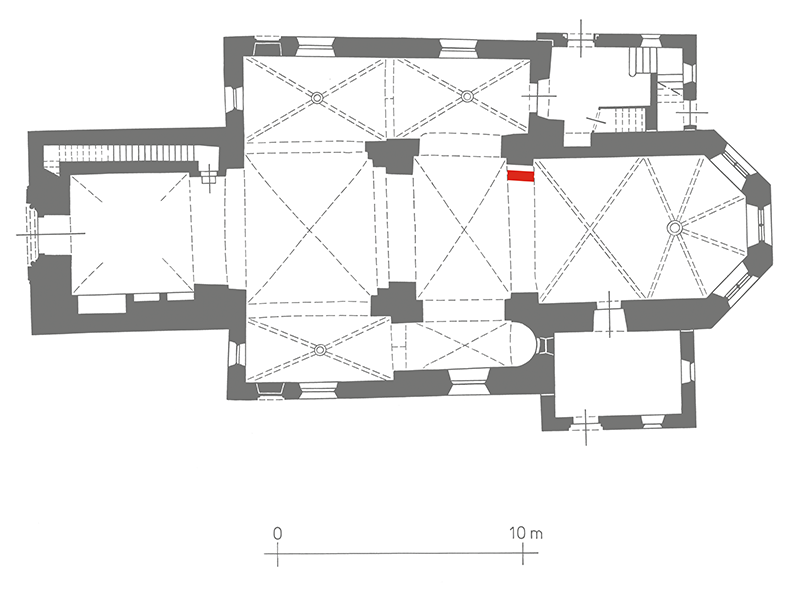 Dortmund-Wellinghofen, Protestant church, formerly St. Chrysanthus and Daria, ground plan (The mapping (German version) can be opened by clicking on the red marking).

Building structure
Hall church comprising two bays with trilaterally polygonal closed choir and west tower. It resulted from the Gothic reconstruction of a Romanesque cruciform hall with semi-circular apse and transept. Of this building the west tower, the nave and the former crossing bay as well as the southern transept arm with side apse, each with piers and vaults, have been preserved. Also part of the Romanesque building fabric is the remnant of the former apse in today’s choir with the figurative wall painting fragment. The Gothic choir, that formerly had  a flat ceiling which was later replaced with a vault, has recently been extended towards the east.

Building data
Previous building 2nd half of 9th century, Romanesque new building during the final years of the 12th century, gothic rebuilding including north vestry 14th century, redesign of the choir with south vestry in 1903-1907.

Figurative Romanesque wall painting
North side of the choir arch, fragment of the head of a saint, presumably an apostle or Prophet.

Crafting technique/painting technique
Worked on very-well smoothened, fine-grained plaster the polychrome architectural decorations from the time of construction lie on a thin, but partly also pastose lime-wash. The younger figurative fragment of a saint was not prepared by its own lime-wash; the preparatory drawing in red ochre lies directly on the first painting. A tiny trace of gold could be determined on the halo.

Conservation history
Exposed and restored in 1978, renewed conservation in 2008 with pointillism reintegrations to complete the late-Romanesque contours. Except the preparatory drawing, there remains hardly anything of the design of the figure, only of the upper paint layers in the arcade framing the head there is slightly more preserved.

Description and Iconography
Fragment of the head of a bearded saint in three-quarter profile with a formerly gilded halo under an arcade featuring capital and arch. The parted hair falls down long at the back, is slightly wavy and in several streaks, and provides a glimpse of the freely drawn ear that has been set at eye-level. The long neck is surrounded by a smooth undergarment which is apart from that covered up by a strongly creased overgarment. Below the gathering of the fabric masses, this falls down on the shoulder of the saint in slightly diagonal, almost parallel folds.
It can perhaps be presumed that the saint is part of the series of figures around the apse that can be regarded as apostles or prophets. Above this one can possibly imagine a Christ in Majesty, even if the arcades must have reached exceptionally deep into the curve of the calotte. The findings are by far insufficient for a definite reconstruction.

Art-historical classification
The interrupted folds of the robe of the figure that give a restless silhouette, are typical features of the so-called Zackenstil (Jagged Style). In the fall of the folds and the construction of the face, there are similarities with the St. Nicholas Chapel in Soest. The haggard type of face and the extended upper eyelids can, however, be found to be even more connatural in the Church of St. Blaise in Balve which was also fitted with a series of figures during the same period. The fact that the qualitative Wellinghofen Fragment can definitely be allocated to the series of Zackenstil paintings from the middle of the 13th century, that were produced either in Soest or were influenced by studios in Soest, also shows the close connection to the prophet scenes in the Tree of Jesse window in Lohne (today in the LWL-Museum für Kunst und Kultur in Münster).