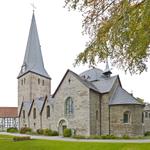 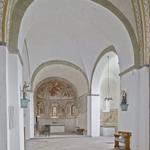 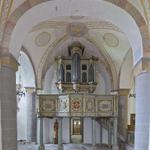 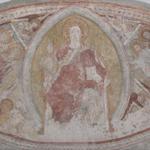 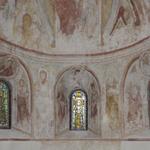 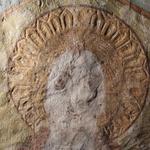 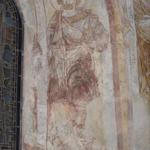 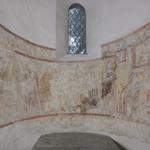 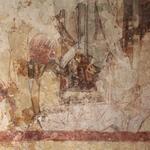 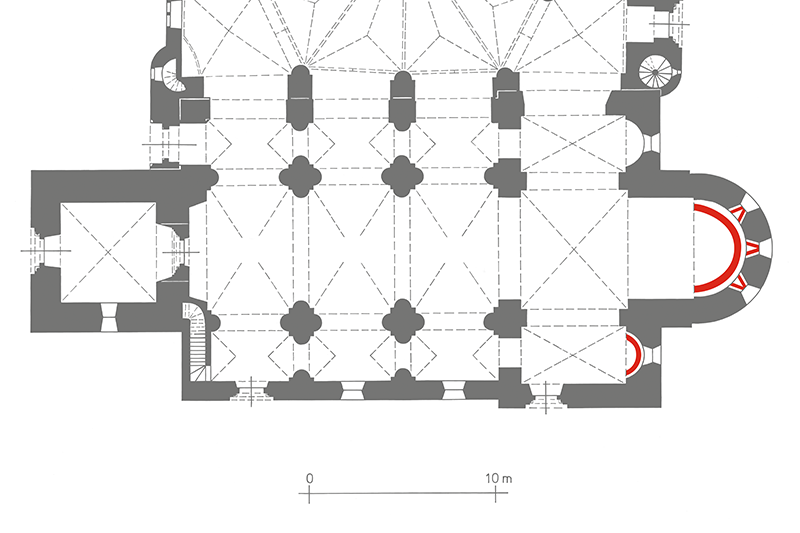 Balve, Cath. Church of St. Blaise, ground plan (The mappings (German version) can be opened by clicking on the red markings).

Building structure
Hall church comprising three bays with transept, west tower and choir with semi-circular apse. The transept has eastern side apses. On the north side the church has been extended by a neo-Romanesque central building.

Romanesque polychrome architectural decorations
1965/70 and 1981 reconstructed, cautiously incorporating fragments of the polychrome architectural decorations of the time of construction, restored 2012.
On the structural elements of the older eastern part of the building only traces of the green ashlar voussoirs could be found in the choir and transept. On the end face of the choir apse a light-green ashlar painting with raised white joints still shimmers today below leaf frieze belonging to the late-Romanesque decoration which provides evidence of a coloured pattern in the eastern parts during the end of the 12th century and has also been reconstructed on the voussoirs in the crossing.
In the nave the polychrome architectural decorations from approximately 1250 take over the small-scale divisions that must have been hewn with great difficulty from local Sauerland stone. For example, the crocket capitals completely related in the nave are certain to expect a painted wreath of leaves as have been discovered in similarly shaped capitals in Wormbach. The half-piers with their red, grey and green frames with white joints as documented in findings are in effective contrast with the pier corners left in white. The face ends of the arches of the central nave are checkered alternately with four different types of marbling, of which there is still some evidence, in particular in the west bay. The soffits of the arches probably once also bore decoration: On the barrel vault between the east and middle bay a red carpet-like pattern on a white background, framed with light accompanying strips is shown that consists of a grid made up of diagonally arranged squares with crosses on the interfaces. Different to the many Westphalian painting systems of the Romanesque period in the groin vaults of the central nave there were no painted spandrel ends in the cap corners. Slightly above the transom and leaving out the groins, accompanying ornamental ribbons with tendril decoration rose to the apex of the vault that was decorated with a central medallion. This could – as is still shown in the western vault with the representation of a lion – even be designed with figures. On the vault caps there were still the remains of further medallions and tree-of-life motifs that refer to heavenly life ever after.
In the side aisle vaults that are depicted as barrel vaults with lunette caps, there are no longer any remains of the original colour scheme.

Crafting technique/painting technique
Presumably single-coat lime plaster that is relatively evenly smoothened. On the already long since dried plaster several coats of approximately 2 mm thick lime wash were applied with a wide brush as a ground. Without direct incisions, the preparatory drawing was then applied in red ochre onto the still damp lime wash. In the area of the calotte the halos of Christ and the saints and some parts of the throne have been plastically emphasised by making indents scraped out of the final render. Here the figures are designed more elaborately than further below, also the faces of Christ and Mary have particularly differentiated modelling. Contours were applied with caput mortuum or black. Gildings can be found more frequently in the calotte, for instance on the areas plastically accentuated by indentation, but also on robes and attributes, in the window area only on the halos of the prophets. The picture backgrounds were uniformly blue (azurite), visible today is the ochre-coloured underpaint. In the middle section of the Legend of St. Nicholas the complete paint layer with preparatory drawing, inner colouring, contours and highlights is still existent. The pigments here are fixed al fresco in the lime wash. Amongst others, the following pigments were used: iron oxide red, yellow ochre, red ochre, green earth, umber, vermillion, malachite, azurite, red lead, white lead.

Conservation history
Uncovered partially in 1911 and completely in 1915 (except for parts of the Gothic overpaint), then restored by historicising overpaint. 1967/68 renewed exposure and restoration. 2016 conservation of the existing parts. Despite losses that were also due to the poor adhesion of the ground (lime wash) to the plaster, approximately 60 percent of the traditional Romanesque painting shows still well preserved parts with plastic, former gilded areas and carefully designed artistic details that provide evidence of a high quality of workmanship.

Description and iconography
The calotte is dominated by the almighty image of the eschatological figure of the enthroned Christ in a well-extended mandorla, surrounded by evangelist symbols. He has raised his right arm in a blessing gesture, with his left hand (paint layer missing today) he is holding the open book that is resting on his thigh. To the right side of Christ Mary is standing with raised and begging hands. Together with John the Baptist on the left side of Christ and therefore standing opposite her with the same begging gesture is the Deesis group in which the two saints, begging for mercy for the people, turn to the universal ruler. The two saints, both standing on each outer side, can be identified as probably being St. Nicholas on the left in bishop’s attire and to the right probably as St. Blaise. As a martyr he is barefoot, bearing a cross-staff and not clearly designated, the place to the side of the Deesis figures is, however, often reserved for the patrons of the church (e. g. in Soest, in St. Patroclus and in St. Nicholas). These two outer figures are standing in a slight contrapposto and are looking down frontally on the observer.
In the window zone four larger-than-life figures are depicted to the sides of the three arched windows. They are designated by tituli and halos. With the exception of the southernmost, female figure (Queen of Sheba?) they can be deciphered as prophets. The row of prophets is continued on a slightly smaller scale in the windows where six further standing prophets with tituli are set in the deep window reveals. Centrally in the apex of each of the three window soffits there is a medallion. In the eastern window the bust of a female figure is depicted who can be identified by her veil as the Mother of God. In the two other windows the paintings are by most appearances most likely to be the busts of prophets with tituli that therefore complete the ensemble of twelve Old Testament figures.
In 1434 three standing figures, each to the south of the windows, have been remodelled to form apostles of which, as a reference area, a fragment of Matthew has remained with an open book and a dating inscription in it.
The pictorial frieze in the southern side apse shows an unusual legend from the life of St. Nicholas. Several scenes are depicted in the course of which St. Nicholas appears to the thieves of a treasure and persuades them to return it, whereby the owner of the treasure, a rich heathen, is converted to Christianity.

Art-historical classification
In the figures of the calotte and those of the St. Nicholas frieze, many associated motifs can be found. The design of the paintings can therefore be clearly allocated to one studio. Among the figures at least three artists can be identified: the figure of Christ, Saint John and St. Blaise, the prophets standing at the side of the east window, the two prophets in the reveals of the east window and the Jew who is scourging the picture, appear to originate from one artist. The faces of Mary and St. Nicholas modelled in colour in the calotte show a differing character. The prophets in the northern window reveals are different again and are more strongly graphical in their layout. The foliate frieze and the framing ribbons were probably reserved for a further artist who was not specialised in figures so that, on the basis of these observations, a vague picture of a studio with several artists is suggested.
There are stylistic parallels with the figurative painting in the St. Nicholas‘ Chapel in Soest and the glass painting in Bad Sassendorf-Lohne (today in the LWL-Museum für Kunst und Kultur in Münster), both from studios in Soest, and with the fragment of a figure in Dortmund-Wellinghofen, although the artists could not be identified here as being the same one. There are even closer connections with the book paintings, particularly with the Donaueschingen Psaltery by a painter probably from Hildesheim. It is possible that both artists had similar pattern sheets that they used for their work, so that a closer cooperation and even the same artist cannot necessarily be presumed.
The wall paintings in Balve with their restrained extensions and their many preserved, very qualitatively carried out details and the still recognisable overall draft, present significant evidence of the Zackenstil (Jagged Style) in Westphalia.