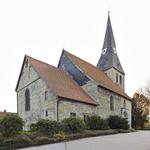 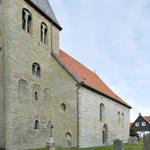 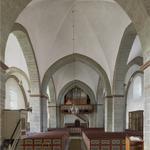 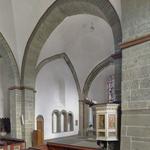 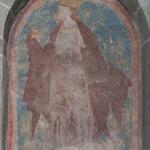 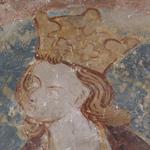 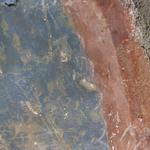 Bad Sassendorf-Lohne, wall painting, Young King, detail of the ornamental motif at the transition between blue background and red surrounding of the picture. Photo: LWL/Heiling 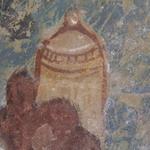 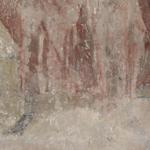 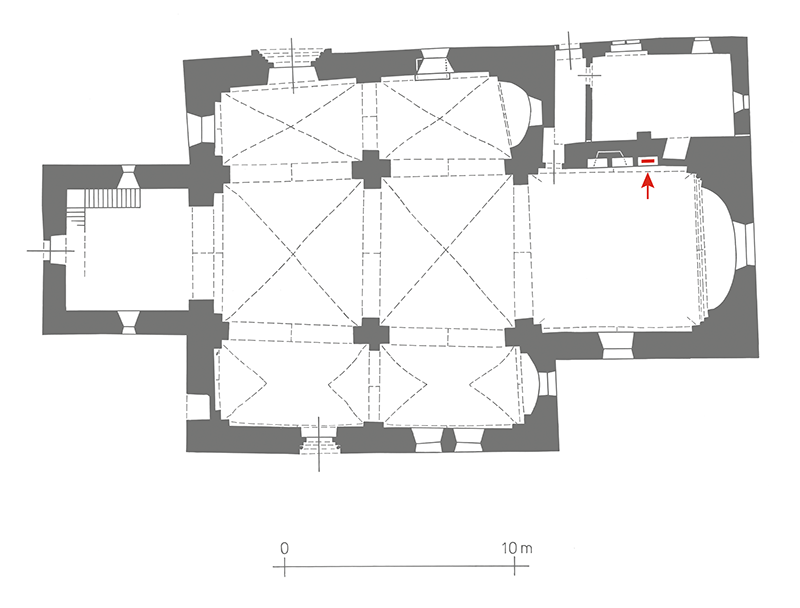 Bad Sassendorf-Lohne, Protestant church, ground plan (The mappings (German version) can be opened by clicking on the red markings).

Building structure
Broad structure of a three-naved hall of two bays with its straight closed choir and west tower.

Craft technique/Painting technique
Fresco painting on a thin, smoothened layer of fresh plaster that has been reapplied in one operation on the already plastered niche that perhaps originates from the previous building. Incisions and traces of other constructions aids are missing. Red preparatory drawing and blue (azurite) background on ochre-coloured underpaint. No remnants or traces that indicate gilding.

Conservation history
Revealed in 1954/55 as a result of removal of a gothic wall tabernacle installed in the niche around 1700. Restored in 1957 with partial retention of the remains of gothic overpainting in the blue background section. Only a few reintegrations exclusively in parts where the plaster is missing. Paint layer losses in the lower parts of the figure but otherwise, to a great extent, never overpainted late-Romanesque paint layers, partially preserved even including the black contours and white highlights.

Description and iconography
The beardless King with shoulder-long, wavy hair is standing in front of a blue background and with his crown and cloak overlaps the painted frame. He is depicted facing towards the left in a three-quarter view. His right hand – covered by his cloak – is holding up a cylindrical vessel with a conical lid. His left-hand is held against his chest and supports the presentation of the vessel. His dark red cloak is bordered with ermine and is draped in dynamic and broken contours and ends in sharp-edged pleats. It is open and reveals a glimpse of a pink-coloured, precious robe. The king is pressing the weight of the folds of fabric against his body with his left forearm. Forming a loop over his forearm as a bundle of pleats, it cascades below it in diagonal, only imaginable folds reaching to just above the feet.

With great probability this is the youngest of the Three Kings, being part of no longer preserved scene of the Adoration of the Magi. He could be looking at a Madonna with Child in the middle niche to whom he is presenting the precious contents of the vessel as a gift. As a consequence, the two older kings, must have been located in the western niche of the three arcades in mirror-image positions, staggered behind one another.

Art-historical classification
Latest stage of the Zackenstil (Jagged Style) in transition to gothic, recognisable by the autonomous cloak with its sharp-edged pleats, the gothic, courtly impressed features of head and hair and the new ease of the king’s stance. Stylistic references to the Soester Gnadenstuhltafel (Throne of Mercy Panel of Soest) (around 1250/60, Staatliche Museen zu Berlin, Gemäldegalerie) and to Lippstadt, Soest-Nikolaikapelle and Soest-Ostönnen.